Why Use an Interjections Checker? 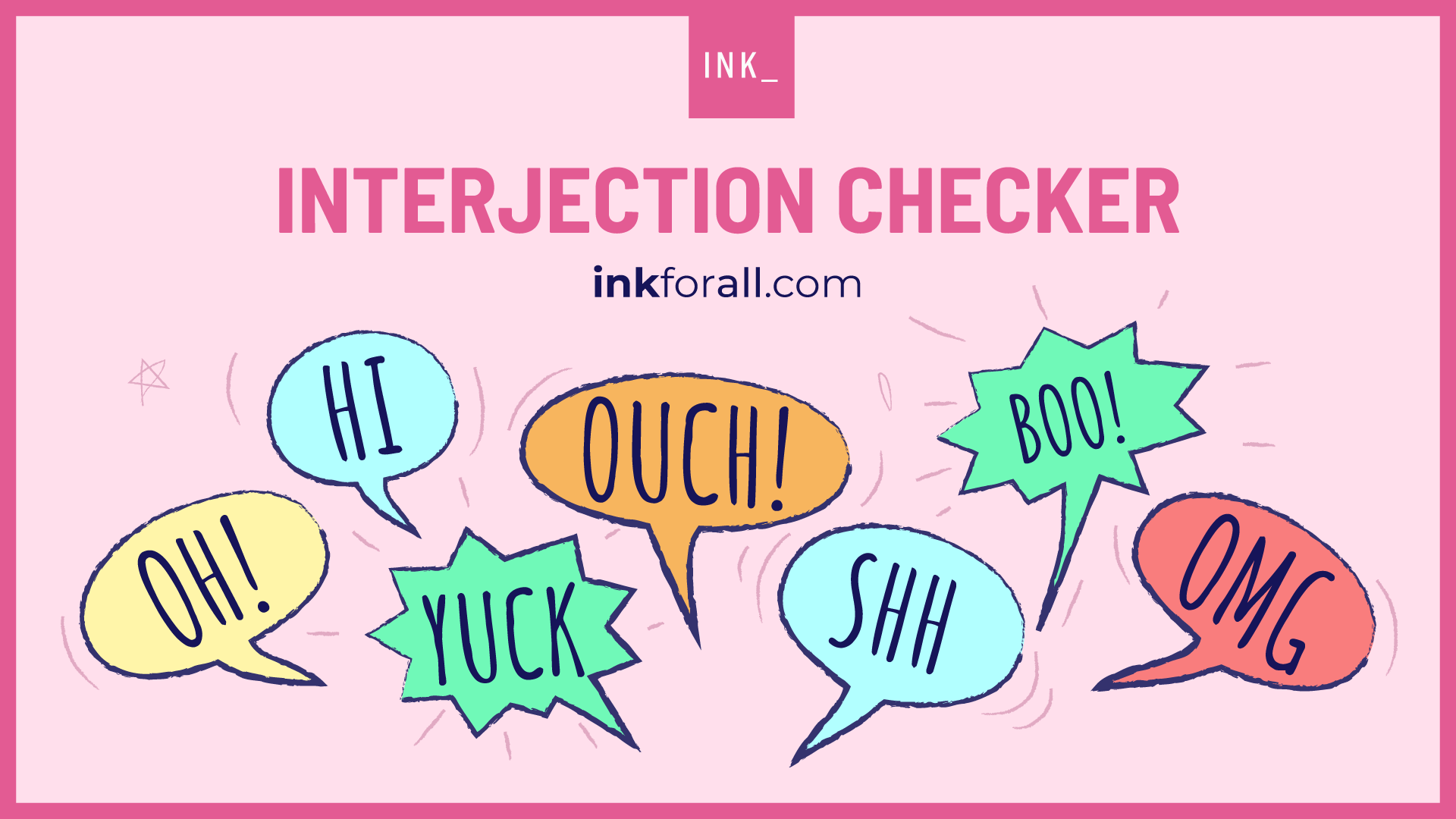 Interjection checkers provide the most convenient way to identify an interjection sentence. We use interjections all the time, whether to express excitement or convey disgust. They are exclamations that help people understand what a speaker wants to say, without the speaker saying it.

We occasionally use interjection words or phrases to express agreement or disagreement with specific statements. Aside from using these words to greet others, we also use it to show what we're thinking.

What is an Interjection?

Interjections are words used to express a sharp or sudden feeling or emotions. The meaning of these words is fixed, so the listener automatically understands the emotion of the speaker. For example, interjections like "ouch" can convey pain, while "eew" can suggest disgust. Although these words appear at the beginning of a sentence, they do not relate grammatically to the other parts of the sentence. Also, interjections do not help users understand the relationship between words and phrases in the sentence.

An interjection is one of the eight parts of speech, along with nouns, verbs, adjectives, adverbs, prepositions, and conjunctions. However, some grammar experts are sure it's the least important part of speech.

That's because, unlike the other seven parts of speech, interjections don't make sentences any clearer. Instead, some authors use these words to convey their feelings to listeners or readers.

As a result, interjections are rarely used in formal or academic writings. Instead, you'll find them in fiction, or other artistic writings alongside punctuation meant to convey emotion — the exclamation point.

Before considering how an interjection checker can help your writing, let's explore the types and examples.

Nine Types of Interjections and Examples 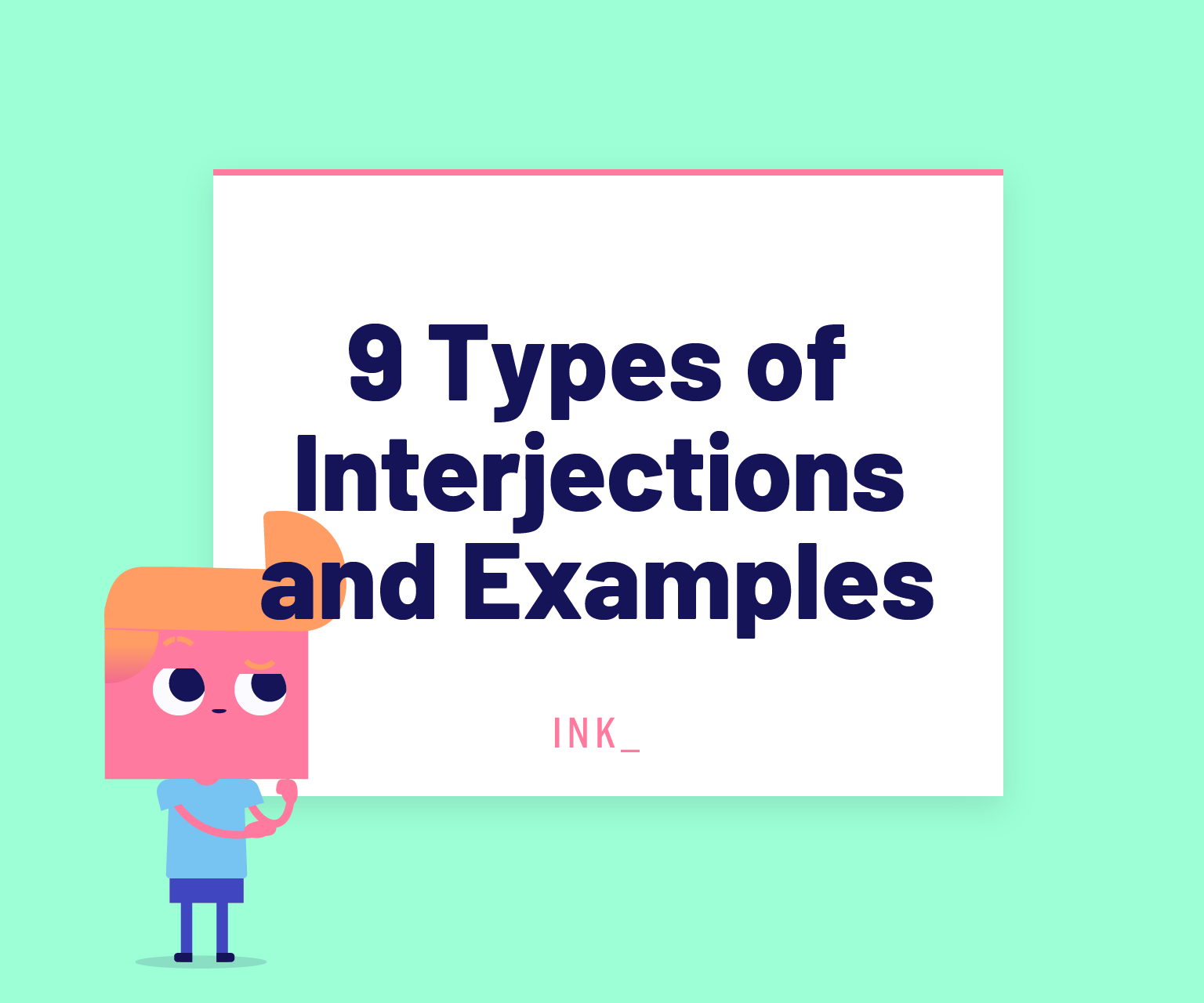 We use these interjections to convey an emotion of warmth to other people when we meet them. Some examples of interjection for greeting include Hey!, Hi!, Hello!, to mention a few.

Interjection for Approval and Praise

We use these interjections to indicate to express immediate emotion of happiness or joy. Some examples of interjection of joy include Hurray!, Hurrah!, Yippee!, Wow!, to name a few.

3. Interjection for Grief and Pain

Speakers or writers use these interjections to express strong emotion of grief about a sad event. It could also serve to convey a sharp pain. Some examples of interjection of grief include Oh!, Ah!, Alas!. Ouch!

In writing, an interjection of surprise expresses a strong sense of wonder or shock at an event. Some examples of these interjections include Gosh!, Oh!, What!, Whoa!, Ha!, Ah!, among others.

Speakers and writers use these interjections to say goodbye or farewell. Some examples of interjections of bidding farewell include Bye!, Good-Bye!, Farewell!, among others.

We use interjections of fear to express an unpleasant emotion caused by the threat of danger, pain, or harm. Some examples of this type of utterance include Eek!, Yikes!, to name a few.

As the name implies, speakers and writers use this category of interjections to convey a feeling of annoyance or disapproval. Examples of Interjections for displeasure include Boo!, Yuck!, Whoops!, Ugh!, among others.

8. Interjections for Expressing Doubt or Hesitation

Speakers use this category of utterance when they're unsure of the next thing to say. So, they use the interjection to express their thought process. Examples of utterance for expressing doubt include Er, Hmm, Uh, among others.

An interjection checker can help identify this part of speech in your writing.

Rules for Using Interjection in a Sentence 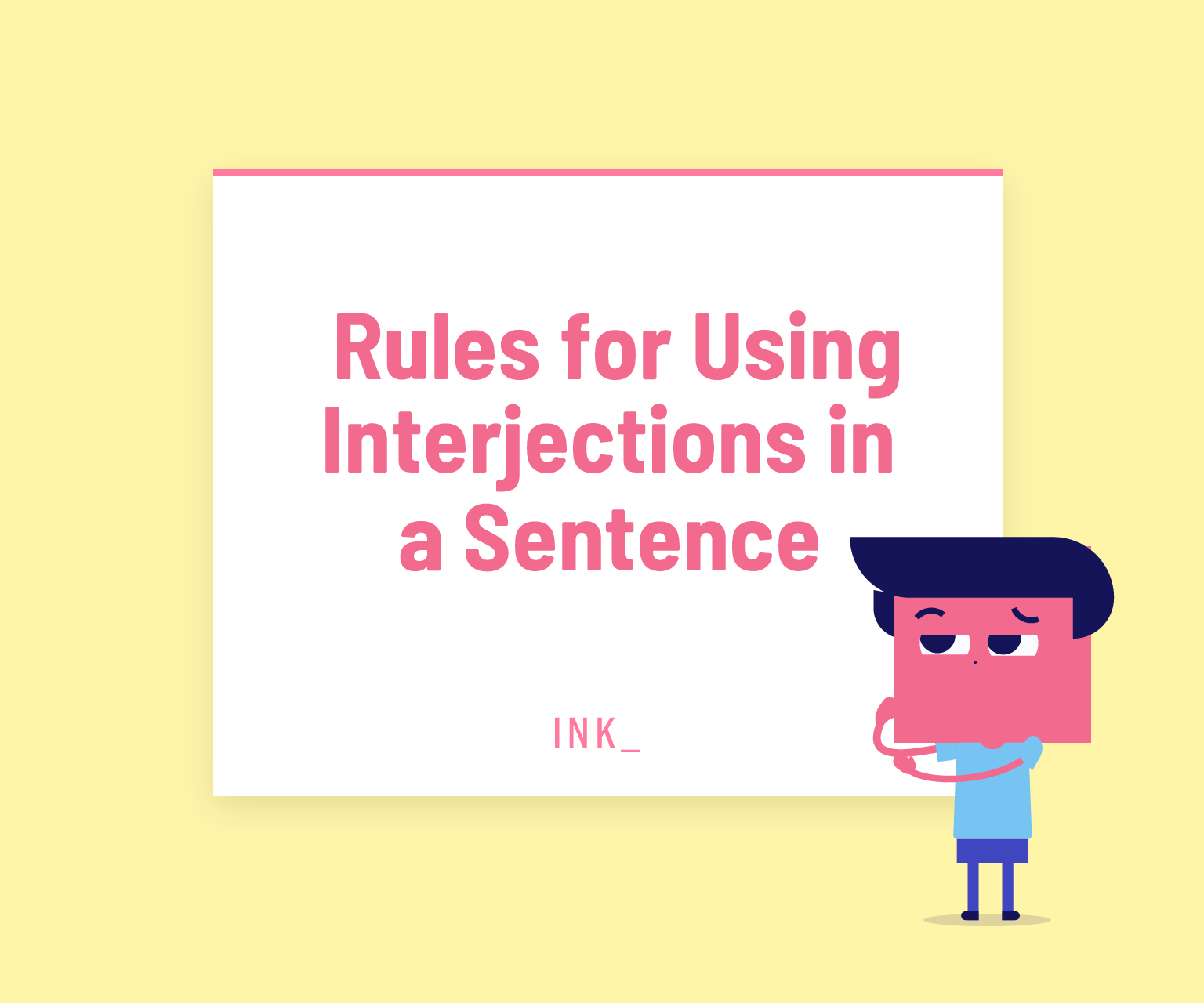 1. Know When to Use Interjections

As said earlier, you can't use interjections in formal writings. Formal writings such as academ ic texts, research papers, and school essays are meant to be factual, concise, and impartial. As such, it would be inappropriate to express emotion in these writings.

You're more likely to use these words unconsciously in informal speeches. This is especially true for filler words such as um, erm, and ah.

Interjections are a handy language device in creative writing. As a writer, you can use these words to convey the emotions and feelings of the characters.

2. Know Where to Interject

Writers usually use interjections at the beginning of sentences.

Note that the sentence begins with an interjection "Bravo," with an exclamation point illustrating the intensity of the emotion.

With that said, we can also use similar utterances in the middle or end of a sentence. This is useful for interjecting a bit of feeling or express confusion at any point in a sentence.

In the first sentence, the word "huh" expresses confusion — or dismay. Rather than use an exclamation point to convey the emotion, the interjection changed the sentence into a question.

In the example, "oh gosh" is a complete sentence, although it doesn't have a subject or a verb. The emotion it conveys is the main point.

3. Punctuation is a Powerful Ally

Punctuations are essential when using interjections, and how you use them can significantly impact the sentence's meaning.

For example, an exclamation point is used to convey shock, surprise, or extreme reaction. On the other hand, a comma or p eriod expresses a milder emotion, such as a greeting.

Sometimes, an interjection can precede an interrogative sentence, therefore ending in a question mark. It's a way to express uncertainty, confusion, or disbelief.

As you can see from the examples, exclamation points and interjections often go hand in hand. But, you can't merely add an exclamation to any word and call it an interjection.

"Peter" remains a noun, even when you use the name in exclamation.

Aside from the various known interjections, writers occasionally make up entirely new ones to create catchphrases. That way, certain utterances become synonymous with specific characters. 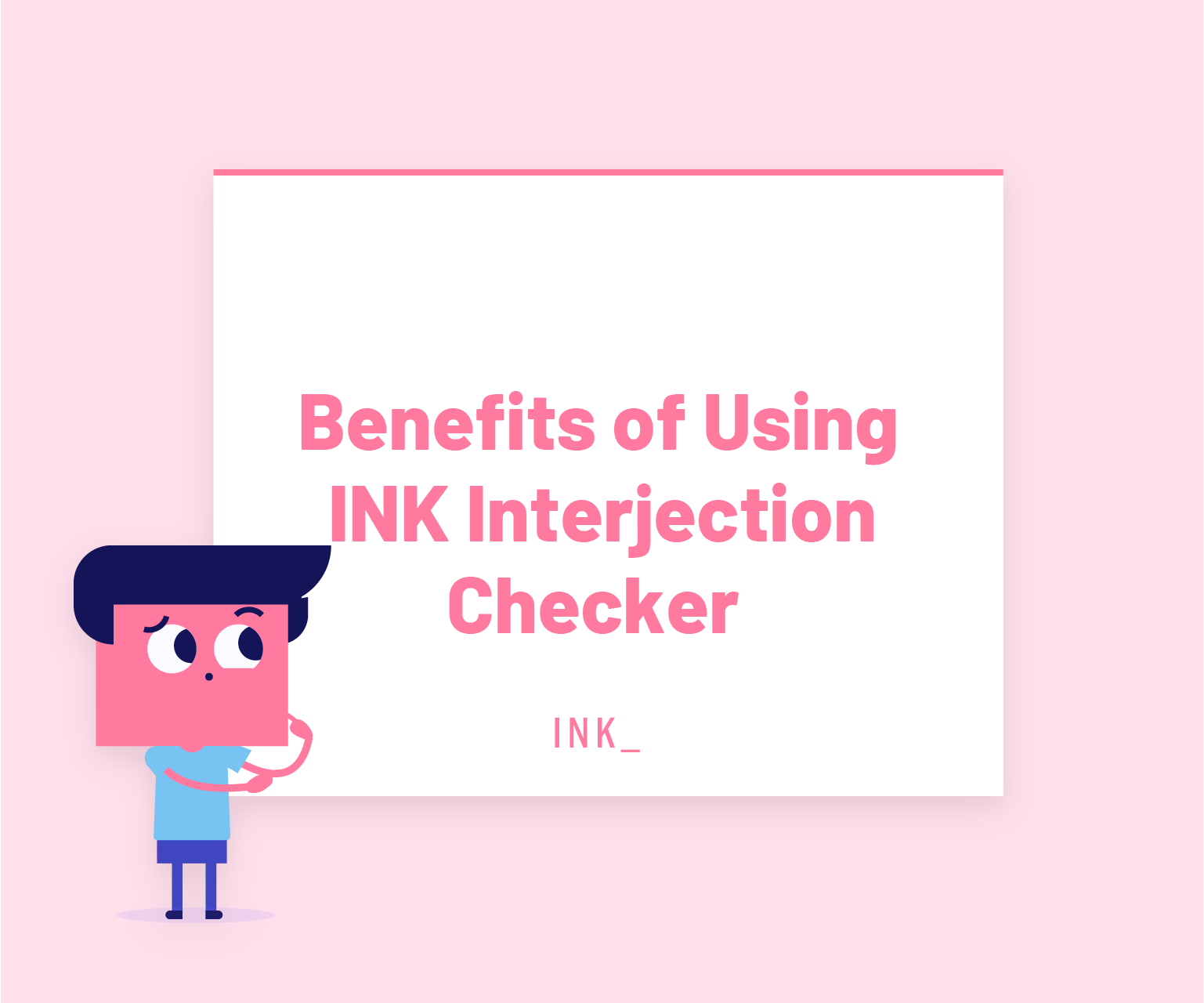 As you may have guessed, identifying interjections in writing can be challenging, especially in tricky punctuation situations.

In the sentence above, the speaker is shouting the word "run" with a good deal of sudden emotion. But despite the exclamation point and the feeling it conveys, "Run" is not an interjection.

Instead, it describes an action. The speaker is informing others not to gawk at the lions in the cage, and they should run.

Rather than go through the wonder if a word is an interjection, noun, or verb, you could automate it. Paste your text on the INK Interjection Checker tool, and let the tool handle the rest.

Whether it's academic writing or school essay, this interjection checker can help you quickly find these utterances. Then, you can choose what to do with the information.

Read More: LMAO Meaning And How To Look Good When You Use It