Our free Noun Checker is an easy-to-use noun finder tool that identifies all types of nouns in your text.

Benefits of a Noun Checker 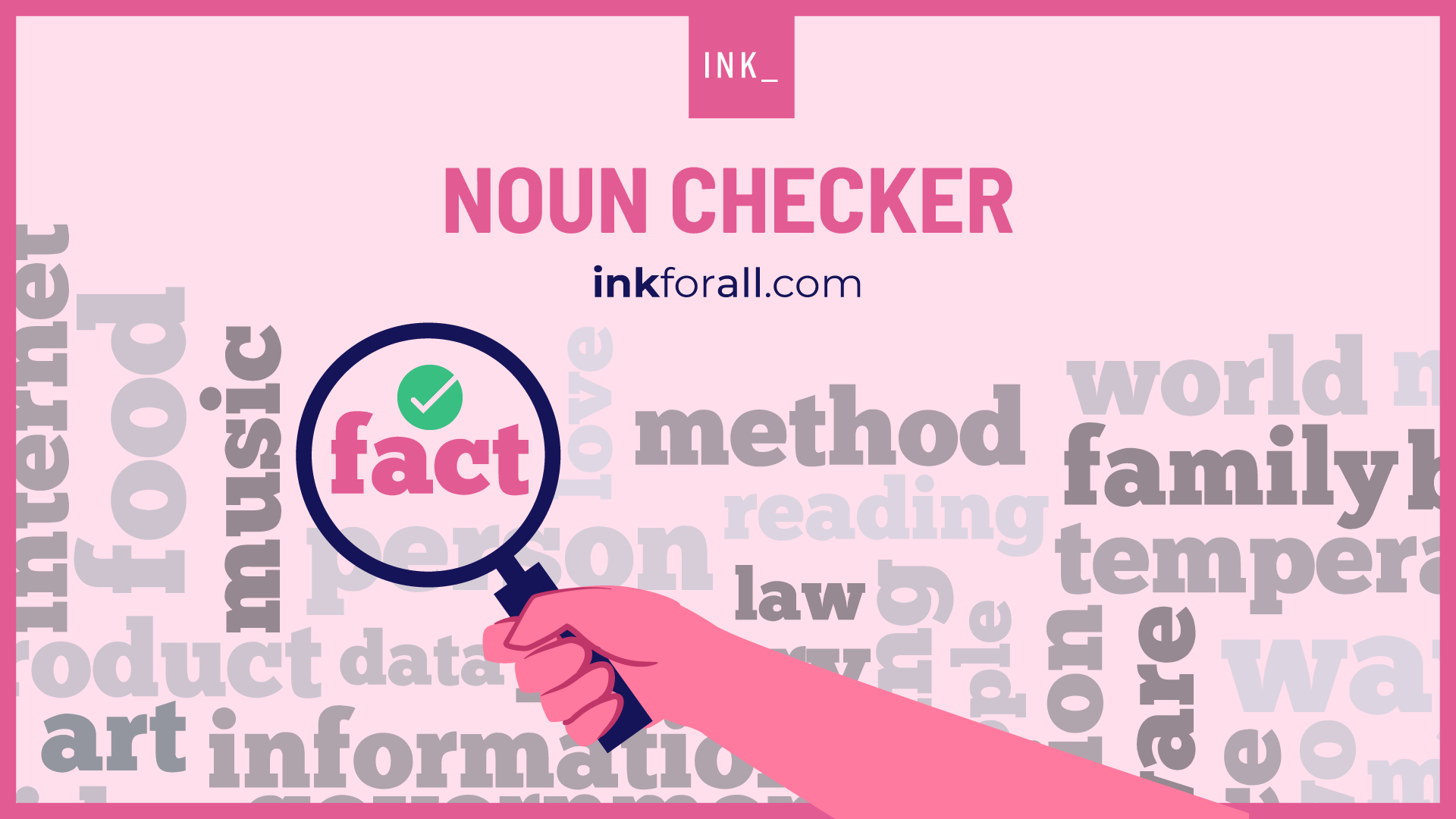 INK Noun Checker tool can help identify the nouns in your writings.

Basically, nouns are words that refer to people, places, or things. People's understanding of nouns have been based on this definition.

Modern linguists, however, believe that this traditional definition of nouns is overly simplified. That's because it relies on a super vague term such as "thing" to describe this word class.

Along with defining the non-specific term, "thing," this post explores the types of nouns, including examples. We'll also consider the various ways to use this word class in sentences and how you can benefit from using INK Noun Checker.

What is a Noun?

A noun is a person, place, or thing. In this definition, the term "thing" could refer to inanimate objects, ideas, abstract concepts, and activities. Phrases and other parts of speech can also behave like a noun in a sentence.

In this example, the verb running acts as a noun, and it's the subject of the sentence.

Nouns can exist as singular or plural. In singular form, the noun refers to one thing, while the plural form refers to more than one thing.

You only need to add the letter "s" or "es" at the end of a singular noun to convert it to a plural form. For instance, the plural form of a cup is cups, and class is classes.

However, not all nouns follow this regular pattern. Examples of such words include mouse and mice, person and people, tooth and teeth, among others.

What are the Types of Nouns and Examples

A proper noun names a specific individual, events, or places. It can also include real or fictional characters as well as settings. In written English, this type of nounsalways begins with capital letters.

In the sentence, the words Iron Man is a proper noun because it names a specific type of suit. While most proper nouns are singular, there are exceptions such as the United States and the Joneses.

Common nouns are words that refer to general things. Whether it's a place, thing, activity, or idea, the nouns in this category are non-specific. So, they are sometimes preceded by a definite article such as the or this.

In the sentence, the weekends and the country are common nouns.

With that said, you can treat a common noun as a proper noun through personification. It involves attributing personal nature or human characteristics to something non-human.

In this sentence, the poet Emily Dickinson talked about death as if the concept is a person.

An abstract noun is a word for something that exists, but we cannot see nor touch. It refers to ideas, concepts, qualities, and conditions. Some words in this category of noun include _courage, freedom, love, friendship, excellenc_e, among others.

In the sentence, the word beauty is an abstract noun. It's a concept that we can't touch physically, or understand it concretely.

As you may have guessed, concrete nouns are the exact opposite of abstract nouns. They name tangible objects, ideas, or phenomenons.

Concrete nouns refer to things that have physical existence and are recognizable through the senses. Some concrete nouns include money, water, ball, cup, to name a few.

In the sentence, My dog, Brutus, and stick are concrete nouns.

We refer to an object or an idea that can form a plural as countable nouns. In this case, the word can take an article; a, an, or the.

Countable nouns can also occur in a noun phrase with an indefinite article or with numerals.

Collective nouns are words for a group of people, animals, or things. Some examples include audience, team, cattle, family, class, jury, among others.

Collective nouns can exist in either a singular or plural form, depending on whether we're using American or British English.

Americans consider collective nouns as singular and use singular verbs with them. Meanwhile, both singular and plural forms are correct in British English.

A compound noun contains two or more words that merge to make a single noun. This form of a noun can exist in a closed form, hyphenated form, or act as a unit.

In the closed form of a compound noun, two words are written together without a hyphen or space, e.g. toothpaste. The hyphenated form, on the other hand, has a hyphen, e.g. son-in-law.

There are hundreds of thousands of nouns in the English language, and a proper noun checker can help identify these words. But, some words can act like nouns, even though they don't belong to any of the categories above. 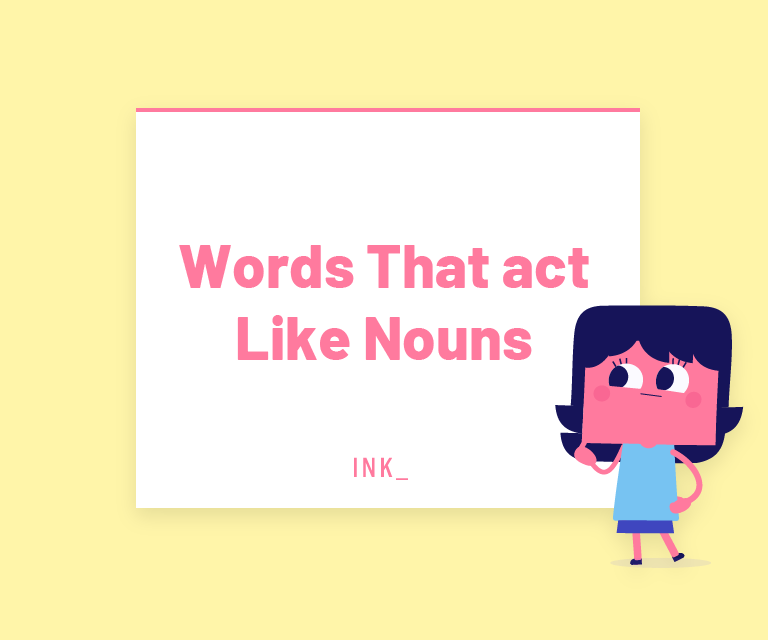 Personal pronouns such as I, you , he, she, it, and they can take the place of nouns when referring to people, places or things. In other words, these words can act like a noun in a sentence.

Pronounscan assume other forms depending on their role in a sentence. For instance, they can assume a possessive form such as mine, ours, theirs, hers, to signify possession of another noun.

Gerunds refer to words that are formed with verbs but act as nouns in sentences. Since every gerund is a verb with ing at the end, spotting them should be effortless.

In the sentence, the word dancing is a noun. Other examples include swimming, running, fishing, among others.

How to Use Nouns in Sentences 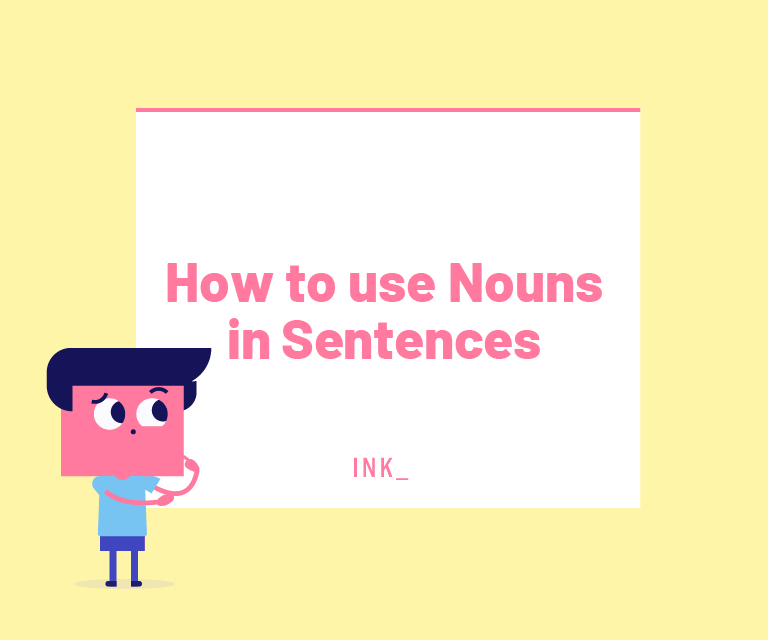 Subjects are an essential component of every sentence. It's the person, place, or thing, that's doing or being the verb in a sentence. So, subjects are always nouns.

In this sentence, John is the subject, while the corresponding verbis a form of to be.

An object refers to a noun, noun phrase or pronounthat's affected by the action of a verb. An object in a sentence can either be direct or indirect.

The direct object in this sentence is the noun email.

3. As Subject and Object Complements

We can also use nouns as subject and object complement. Subject complements usually follow a linking verb, and they provide more information about the subject of a sentence.

Similarly, object complements usually follow and modify a direct object while providing more information about it.

An appositive noun refers to a noun that immediately follows another noun to provide more information or further define it.

In this sentence, James is an appositive. It further defines the subject of the sentence, my friend.

By now, you know that using a noun is not as simple or straightforward as you once imagined. From pluralizing a noun to using its possessive form, issues can always arise when dealing with this word class.

That's where the INK Noun Checker comes in. Thanks to this noun checker tool, you can easily verify the proper usage of nouns.

INK Noun checker is a free tool that allows you to identify the nouns in your text. That way, you can eliminate possible mistakes in your written document and improve your writing at the same time. What's more, this noun checker tool doesn't cost a thing. It's free!