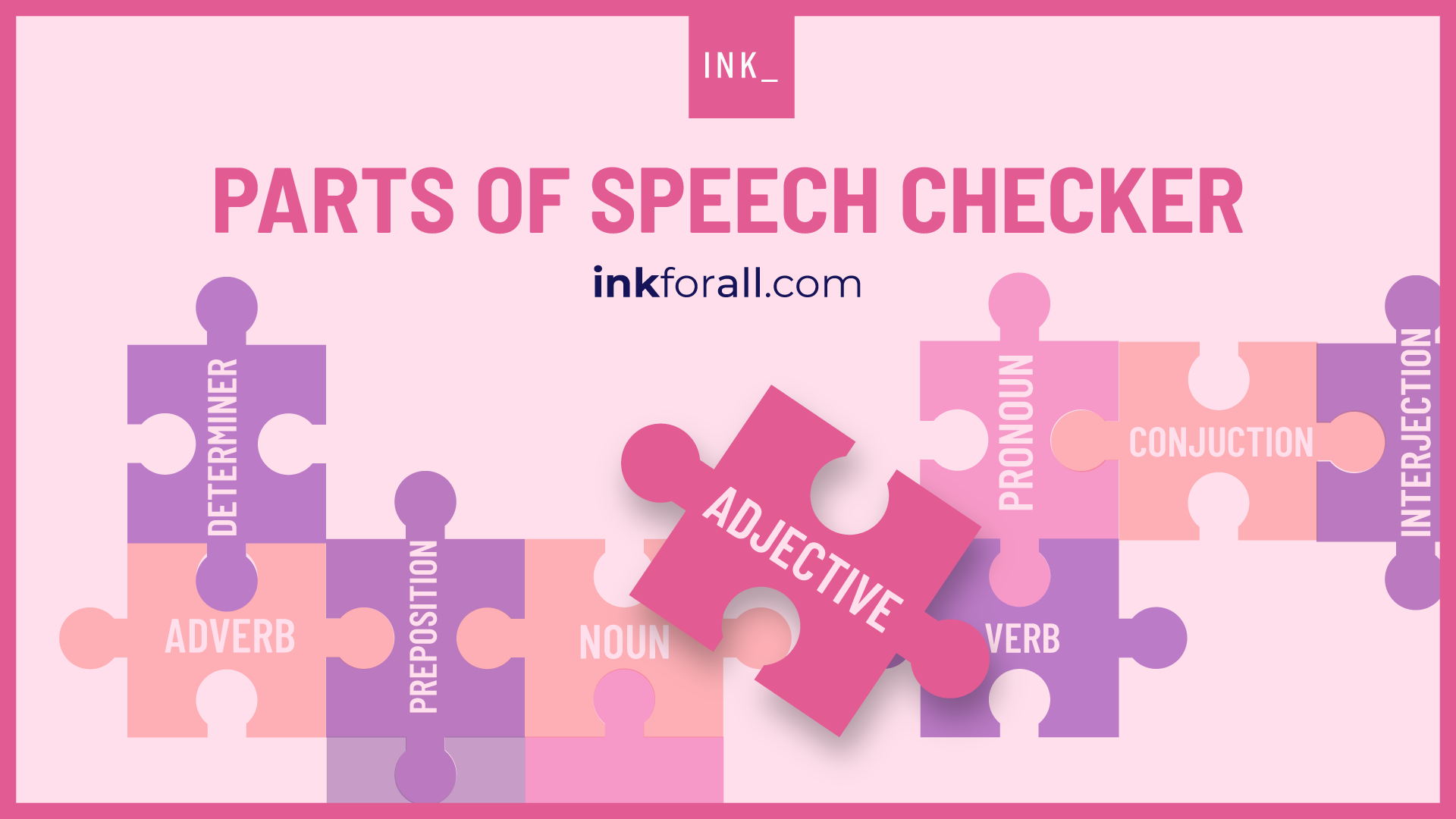 INK Parts of Speech Checker tool can help identify the various word classes in your writing.

Every individual word in the English language belongs to cate gories called parts of speech or word classes. These include nouns, pronouns, verbs, adjectives, adverbs, prepositions, conjunctions, articles/determiners, and interjection.

Meanwhile, some sources named only the first eight word classes, leaving interjections in a separate category.

Knowing how to identify the different parts of speech in a document or writing won't make you a grammar expert. It won't even make you a better writer. However, you'll gain a basic understanding of the sentence structure in the English language, and that's the first step.

In this post, we'll explore the nine parts of speech, including examples. You'll also find out how to identify these word classes in a sentence.

What is a Part of Speech?

Parts of speech refer to any one of the nine main categories that words in English are classified based on their function in a sentence. These are the building blocks of grammar.

Parts of Speech are further divided into two basic categories. These are:

The reasoning is that the words in the open class can increase as language develops. Meanwhile, new words are rarely added to the closed class. For example, we get new nouns every day, but pronouns have remained the same.

Why is it Important to Recognize the Parts of Speech?

The parts of speech are the building blocks of grammar, making them essential for writing good sentences. So, you can't write a grammatically correct sentence in English without knowing at least one word class.

Here are some other ways that knowing the parts of speech can help:

Finally, knowing the difference between a preposition and a pronoun can help you become confident about using the English language.

Nine Parts of Speech and Examples 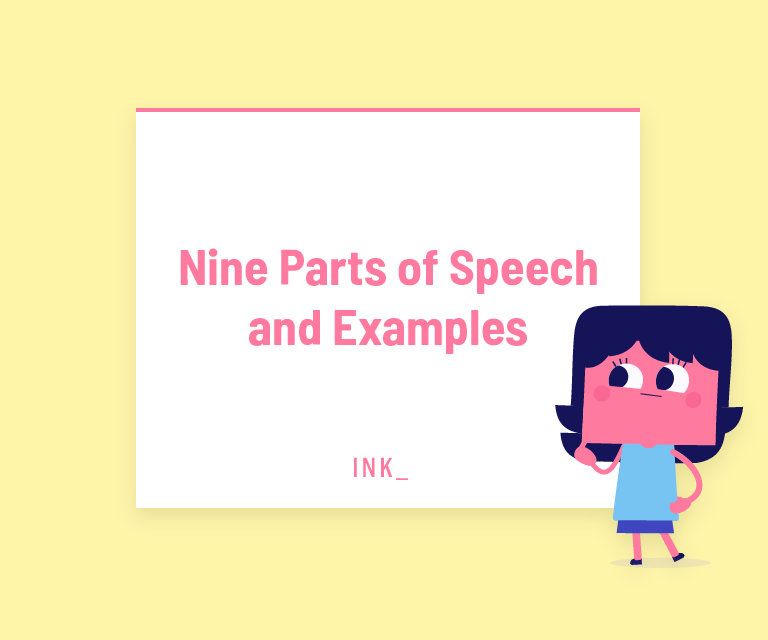 Nouns refer to words that identify a person, place, thing, or idea. These words can assume various roles in a sentence, from the subject that's performing an action to the object, the recipient of the action.

The nouns in the example above are Brutus and dog. Note that we capitalize the first letter of a noun when it's the official name of something or someone. This form of a noun is called a proper noun.

Pronouns are words that replace a noun that was previously mentioned in a sentence. We use pronouns primarily to avoid repeating the noun.

In this example, the pronoun "he" makes it unnecessary to repeat the noun "Peter." Other examples of pronouns include I, she, them, ours, it, them, who, which, anybody, and ourselves, to name a few.

We use verbs in English to express an action or a state of being, need, sense, or preference. Verbs can change form based on the tense (present or past) or based on count distinction (singular or plural).

In the example, the verb "sang" describes the action that Jane performed. Other examples of verbs include dance, be, believe, eat, drink, and became, among others.

Adjectives describe or modify nouns and pronouns. These words give more information or ascribe attributes to the noun being modified. That way, readers and listeners can use their senses to imagine it.

In this example, the adjective "beautiful" tells us a little about the song that Jane sang. Other examples of adjectives are funny, happy, lazy, hot, bright, dull, mediocre, and unique, to name a few.

Adverbs describe a verb, an adjective, or another adverb. It provides additional information relating to time, place, degree, manner, cause, and circumstance.

In the example, the adverb "nearly" provides tells us the extent of Cece's loss. Other examples of adverbs are softly, sometimes, happily, hopefully, often, only, among others. Note that adverbs usually appear between the subject and its verb.

We use prepositions to show the relationship between a noun or pronoun and other words in a sentence. As such, a preposition is always followed by a noun in a sentence, and never a verb.

In the example, the simple preposition "on" describes a location. Other examples of prepositions include over, by, up, against, close to, into, apart from, by, among others.

In this example, the conjunction "but" brings the two sentences together. Other words that belong in this word-class are but, so, or, yet, with, and, to name a few.

Three articles in the English language are a, an, and the. Other determiners include these, those, enough, much, what, and which, to name a few.

We use interjections in English to express strong feelings or sudden emotions such as surpri se, joy, disgust, excitement, or enthusiasm. Note that interjections can either exist on their own or be part of the sentence.

Other examples of interjection include a_h!, Oh!,_ and hi! to name a few.

How to Determine the Parts of Speech in a Sentence 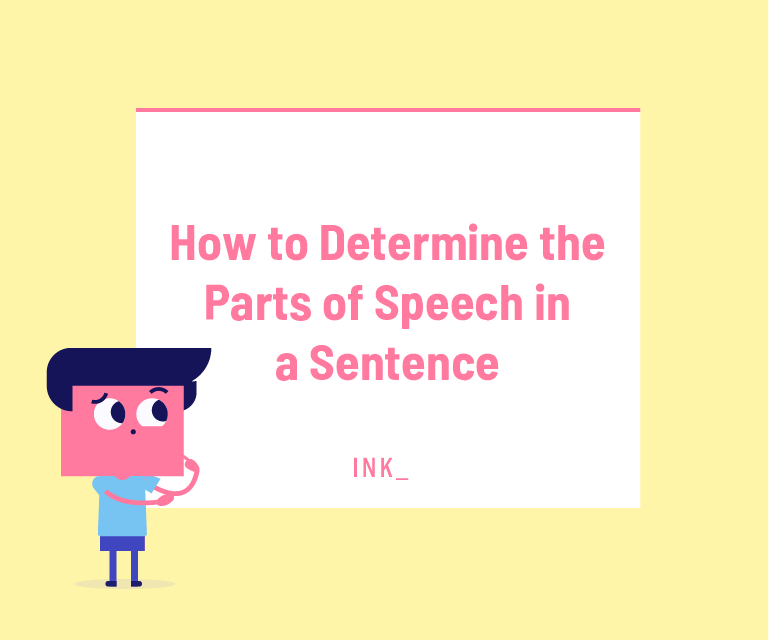 Sentences in English have a similar structure. They usually begin with a subject, then the verb follows. In some cases, the sentence can end with an object.

You can identify adverbs and adjectives based on their placement in a sentence, although there are exceptions.

You'll almost certainly find adjectives before nouns and pronouns in a sentence. Adverbs, on the other hand, usually come right before the adjectives they're modifying.

However, the placement can vary when an adverb is modifying a verb. They can appear before the subject, before the verb, or after the verb.

With that said, conjunctions such as "and" and "but" can appear at the beginning of a sentence. In this case, you'll find the clause or phrase in the previous sentence.

Use Exclamation Points to Identify Interjections

Since interjections express emotion, they're usually followed by exclamation points. Also, interjections can exist on their own in a sentence.

So, if you see an individual word with an exclamation point, it's most likely an interjection.

Use Nouns and Pronouns to Identify Prepositions

Note that the noun or pronoun phrase can include other modifiers such as adjectives, adverbs, or an article.

Identifying parts of speech in a sentence can be tedious, especially for non-native English speakers. Luckily, you can automate the process using INK Parts of Speech Checker.

Paste your document into the text box, and click the Analyze icon to begin. The parts of the speech finder should provide the result within seconds.

Read More: Is There A Comma Before And? An Easy Guide To Using And In A Sentence