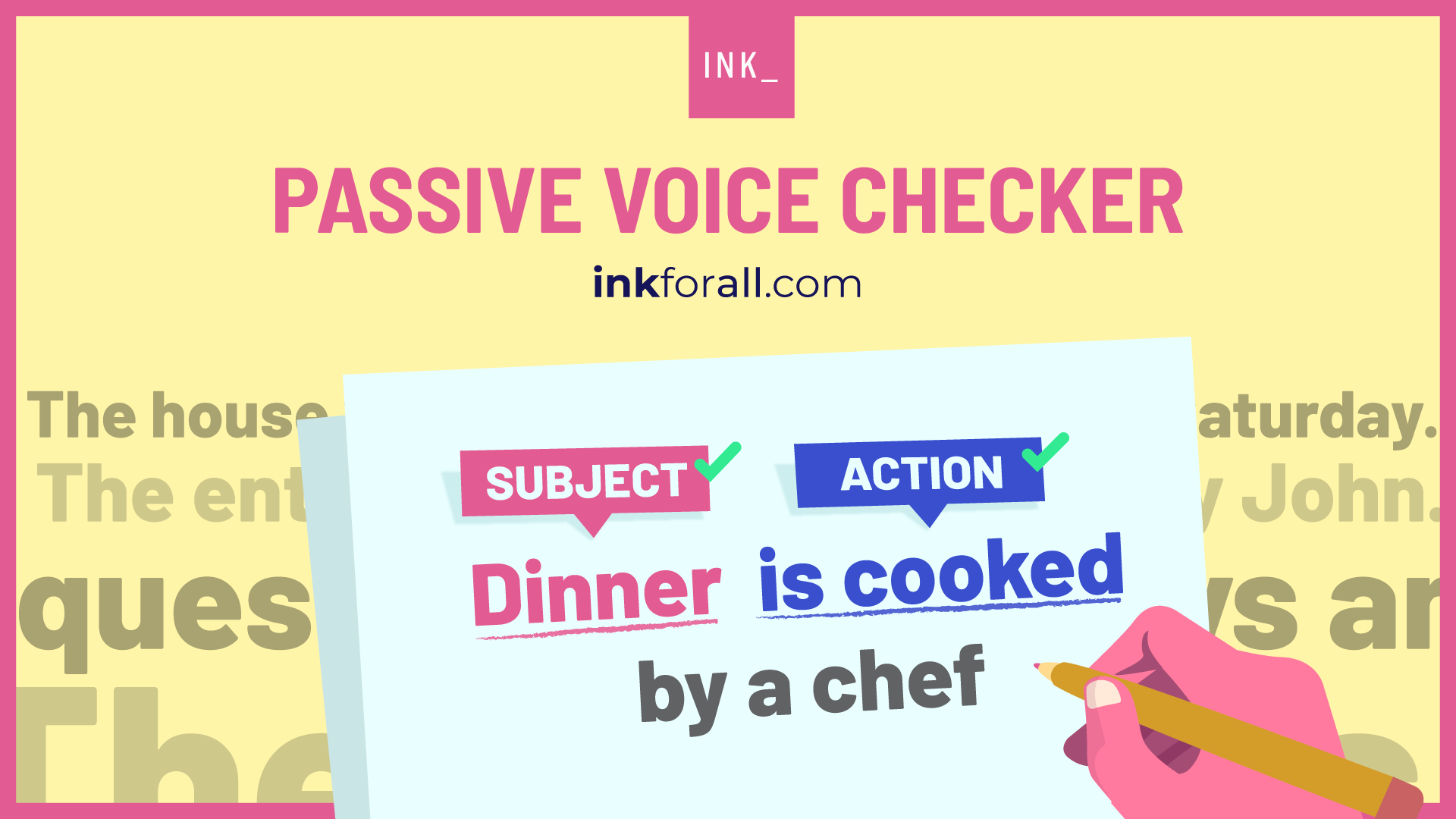 INK Passive Voice Checker can help check for passive voice in your writings.

Since passive voice isn't a grammatical error, you can't rely on a regular grammar checker to catch its usage in a sentence. Instead, you must use a passive voice checker tool that's designed for that specific purpose.

What is Passive Voice?

In English, we use passive voice to emphasize the action and the object of a sentence rather than the subject. That implies that the subject is either less important than the action itself or that we don't know the subject's identity.

Although the sentence is grammatically correct, most editors would recommend avoiding passive voice when possible. If you know who the subject is, it's always better to use the active voice. 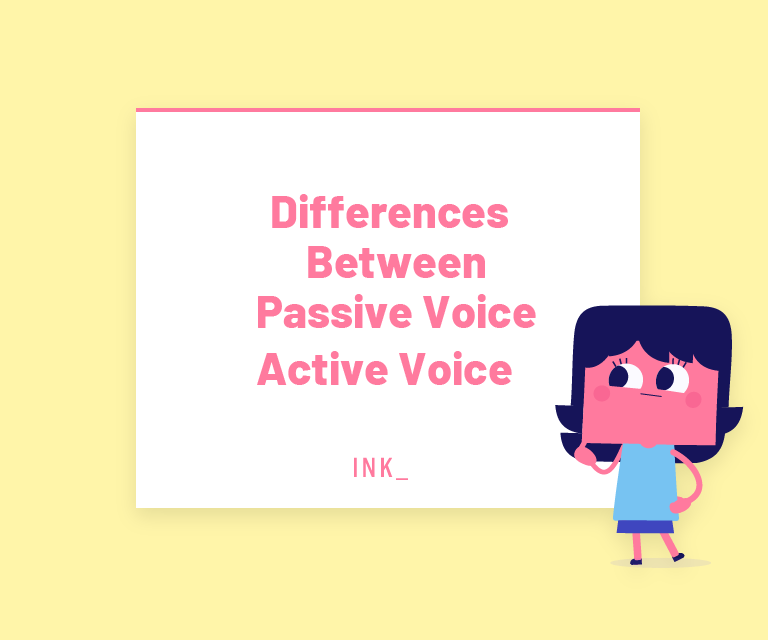 The sentence above has a basic active voice construction, and that's subject, followed by the verb, then the object. The subject, John, performed the action of stealing the wallet.

Meanwhile, in the passive voice, the subject is acted upon by the verb. As a result, we usually construct a passive voice in English sentences using a conjugated form of the "to be." The sentence also includes the verb's past participle as well as a preposition.

Writing a sentence in passive voice is not nearly as complicated as it sounds. It's actually easy to do.

How to Form Passive Voice in the English Language 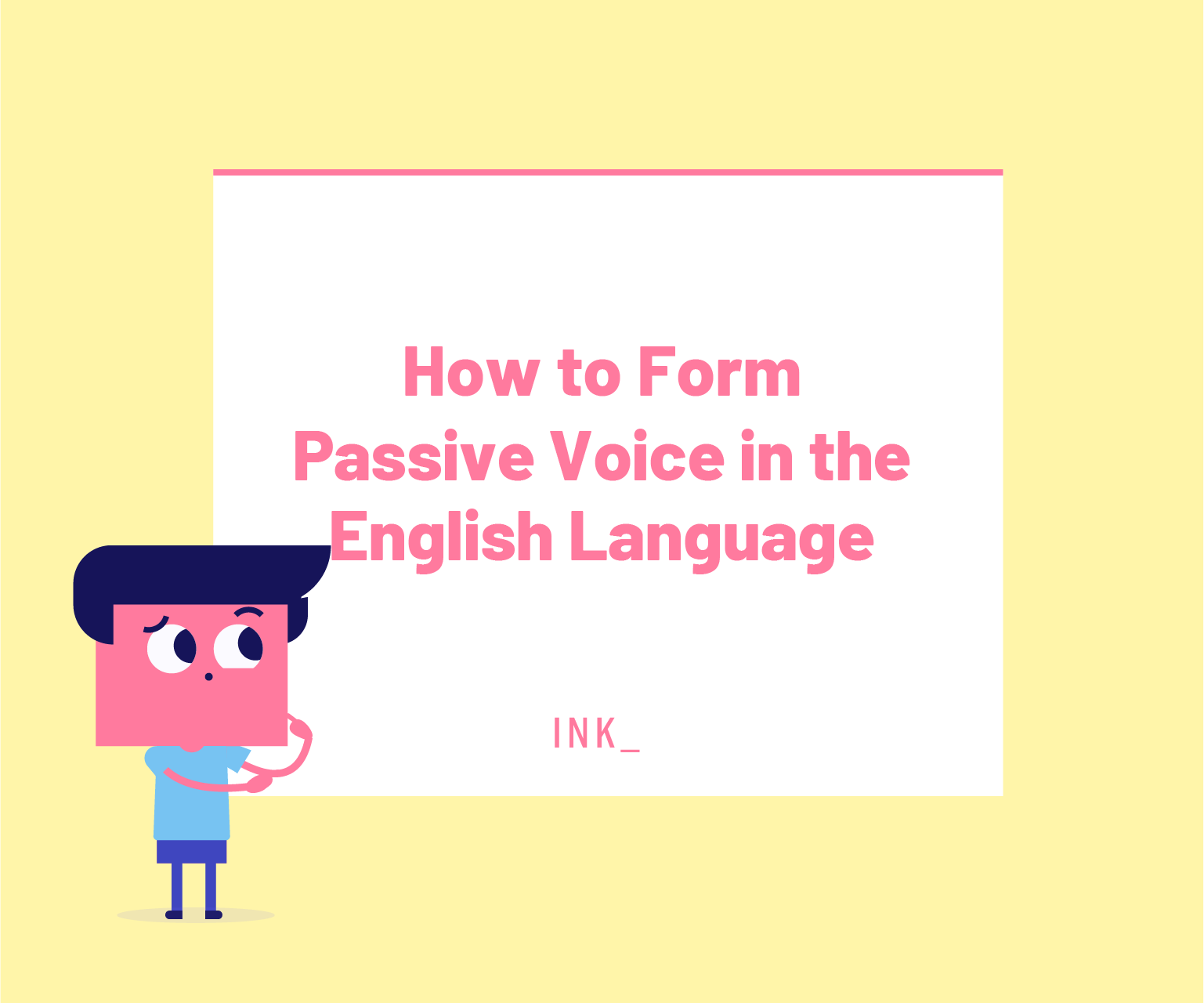 As said earlier, two elements are essential for writing a sentence in passive voice in English. These are the appropriate form of the verb "to be" and the past participle.

Here are some noteworthy methods of forming passive voice sentences.

We can use a bare infinitive after a modal verb or any other verb to write a sentence in passive voice. Some modal verbs include may, must, should, can, and would.

Passive Voice with "To Be Born"

The phrase "to be born" is in the passive voice, and we mostly use it in the past tense. However, it can also work with the present or future tense.

Gerunds refer to a verb form that functions as a noun. We can combine these words with a preposition and a verb to form passive voice.

You can't create a passive sentence when there's no one to receive the action. As a result, verbs that have no object cannot exist in an inactive form.

Examples of such words include die, come, happen, exist, love, occur, sleep, and go, among others.

Instances When Passive Voice is Useful

Even though an active sentence is preferable and more precise, a passive sentence can also be useful in some situations. For instance, we could use this sentence structure to focus readers' attention on the person or thing that an action affects.

In the sentence, we don't know who asked her to take on a new role. So, writing the sentence in passive voice helps us focus the attention on the person being asked.

When the Actor is Unknown

You can use passive voice when the person acting in a sentence is unknown.

In this instance, we're unsure who's resp onsible for increasing Peter's rent. It could be an individual landlord, a rental company, or any number of entities.

Since we don't know who the actor is, it's best to fall back on the passive voice.

When the Actor is Inconsequential

In some instances, we can use the passive voice when the source of the action doesn't matter.

The sentence places more emphasis on the person receiving the action than the person carrying it out.

With that said, the words "have been" is a popular construct in passive sentences. However, if you can do without them, it's always better to use an active voice.

The Problem with Writing in the Passive Voice

It can be Confusing

Most writing instructors frown on the passive voice because it raises the issue of clarity in writing. They usually have to guess what you mean in your text.

As you can see, the sentence above lacks a clear reference to the actor. So, readers might wonder who stole Jackie's purse and why the theft affected her afternoon appointments.

An active voice, on the other hand, can quickly clarify things.

In the second example, we know who is doing the action. And this knowledge helps readers make sense of the sentence.

Wordiness takes away from clarity. It involves using too many useless words that could clutter your writing.

Good writing should be direct and straightforward. Unfortunately, passive voice is neither of those. The passive alternative to an active sentence is often longer, and this makes your writing seem wordy.

Although the two sentences convey the same message, the passive sentence used two extra words. This can add up when you overuse passive voice in your texts.

The basic active sentence structure in the English language is relatively consistent and logical. It usually involves a subject that's performing a specific action. The passive voice turns it the other way round.

So, you have to read the action before knowing the identity of the performer. As a result, readers have to expend more cognitive effort to understand the sentence structure.

While it's okay to use passive sentences in your writing, these complex sentence structure issues can quickly add up. In the end, you'll have a speech, novel, essay, or article that's difficult to understand.

Changing a passive sentence into an active one is simple. You just have to locate the subject and object, then switch your sentence around.

The challenging part is identifying all the passive voices in your writing. That's where a passive voice detector comes in.

INK Passive Voice Checker helps identify the use of passive voice in your writings.

So, a regular grammar checker might not be the most effective at catching all forms of this voice construction. Luckily for you, INK Passive Voice Checker is far from conventional.

This passive sentence checker can analyze your writing within seconds to highlight all the passive voice use. That way, you can rewrite the sentences into active voice.