What is a Preposition Checker? Prepositions may be short words or phrases but when used incorrectly, they could change the context of a sentence. So, it's important that you keep an eye on your prepositions. One way to do this is to use a preposition finder like INK's Preposition Checker tool.

What is a Preposition?

Prepositions are usually short words that indicate the relationship between a noun or a pronoun and other terms in a sentence. In the English language, we use preposi tions to link nouns, pronouns, or phrases within a sentence. Think of these words as the glue that holds sentences together, and they do this by expressing order, time, connections, and positions.

The preposition "in" used in the sentence above shows the relationship between the water and the glass.

Prepositions are an essential part of our speech and writing. They account for the most frequently used words in all of English. These include terms such as of, to, for, with, at, and on, among others.

Ideally, you'll find a preposition in front of nouns. But, you can also place them in front of gerund verbs.

Unlike nouns and verbs, it's impossible to add new words to prepositions over time. That's why we refer to them as a "closed class of words" in English.

Also, prepositions do not have any other form. That means they can't be plural, inflection, or possessive.

What's more, most prepositions have various contextual and natural uses, which makes them more confusing. Sometimes, these words can function as nouns, adverbs, and adjectives.

A preposition finder can help you avoid these confusions. But before we explore the benefit of INK Preposition Checker, let's discuss the types of prepositions first.

What are the Types of Prepositions and Examples

As you may have guessed, prepositions of time indicate when something happened, happens, or will happen. Some examples of this type of preposition include: at, in, on, after, and before.

Since many prepositions fit into this category, it can get a little confusing.

In the sentence above, five different prepositions indicate when something happened. This may seem confusing at first glance, but a set of guidelines can help decide which to use.

The prepositions "before" and "after" indicate when something happened, will happen, or occur in relation to another thing.

Other prepositions of time include about, around, during, until, and throughout.

But, identifying place prepositions is not as complicated as the time counterpart.

Here's a breakdown of the guidelines.

1. Use the preposition "on" to refer to something with a surface.

2. Use the word "In" to refer to something that's inside or within confined boundaries.

3. Use the preposition "at" to refer to something at a specific point.

Other examples of prepositions of place include over, under, outside, inside, below, and above.

Preposition of movement refers to how something or someone moves from one place to another. It indicates the relationship between location and direction.

The most common preposition in this category is "to," which indicates movement towards a specific destination. Other examples of the preposition of movement include across, off, into, down, and through, to name a few.

We use prepositions of agents to connect a noun and a verb. In other words, this type of preposition establishes a causal relationship between the doer and the action.

Common examples of the preposition of agents includes by and with. The word "by" indicates the person acting. Meanwhile, "with" suggests an action with a thing.

Examples of words in this category include along with, in reference to, apart from, because of, according to, instead of, and out of. 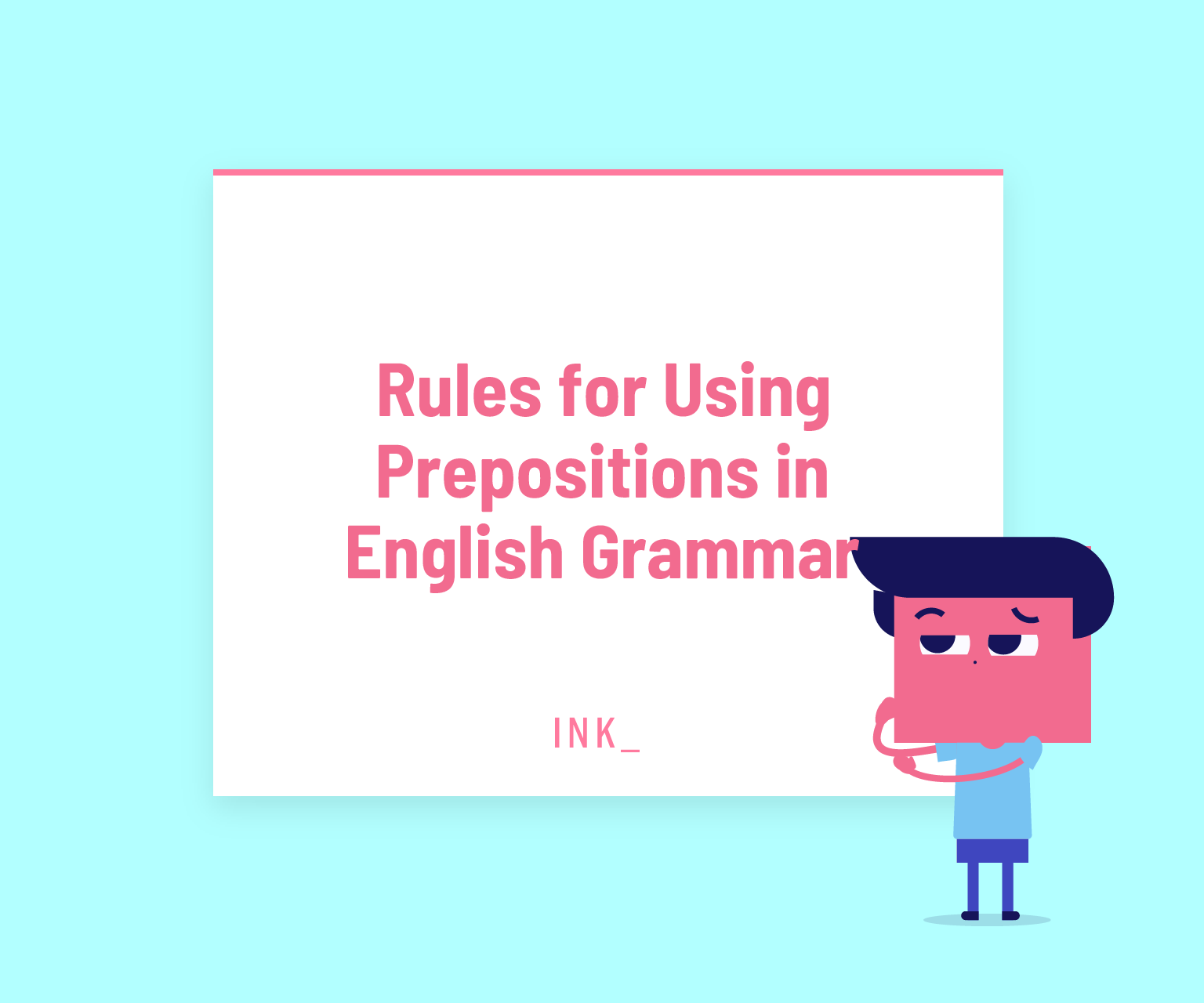 1. A Noun follows a Preposition

A noun or pronoun must always follow prepositions, never a verb. In other words, a verb can't be the object of a preposition, only a noun.

In the sentence, the noun "dog" comes after the preposition "for."

This rule may seem confusing at first. And that's because you may have notices some words that look like verbs following preposition.

However, the words "ride" and "hiking" are not acting as a verb. In the first example, "to ride" is part of the infinitive.

An infinitive occurs when a verb doesn't act as a verb. Instead, it acts as a noun, adjective, or adverb. Also, an infinitive is made up of two words: to + verb.

That means "to ride" is not an action that the person is performing. It's something that they like doing.

In the second example, "hiking" is a gerund. A gerund is a verb form that functions as a noun. Here, "hiking" refers to boots' function. No one in this sentence is performing the act of hiking.

2. A Preposition Must Have an Object

All prepositions have objects. If you use a preposition in a sentence without an object, it's not a preposition. That's probably an adverb.

3. Avoid Using Prepositions at the End of Sentences

As said earlier, prepositions must have objects, and a noun follows them. As a result, you'll rarely find them at the end of a sentence.

However, it's acceptable to end a sentence with a preposition in specific circumstances. The preposition isn't extraneous under this exception.

Removing the word "on" from the end of this sentence will change its meaning. Instead of switching on the set, it would say you turned the television itself.

Knowing which preposition fits into a specific sentence can be tricky. This is especially true when you're dealing with idioms.

An idiom is a phrase or expression whose figurative meaning is different from the literal meaning of the individual elements. In other words, idioms don't exactly mean what the words say. As a result, some pairing rules for preposition don't apply here.

The idea of confusing "have" for "of" may seem absurd. But, it's not entirely impossible.

The sentence above may sound like something we say all the time, even though that's not the case.

The preposition "of" doesn't link or join any idea in the sentence. Meanwhile, "have" is an essential helping verb.

6. Don't Confuse 'to' Preposition with 'to' Infinitive

As simple as it sounds, differentiating a "to" preposition from a "to" infinitive can still be confusing.

One easy way to clear this confusion is to use a preposition checker. 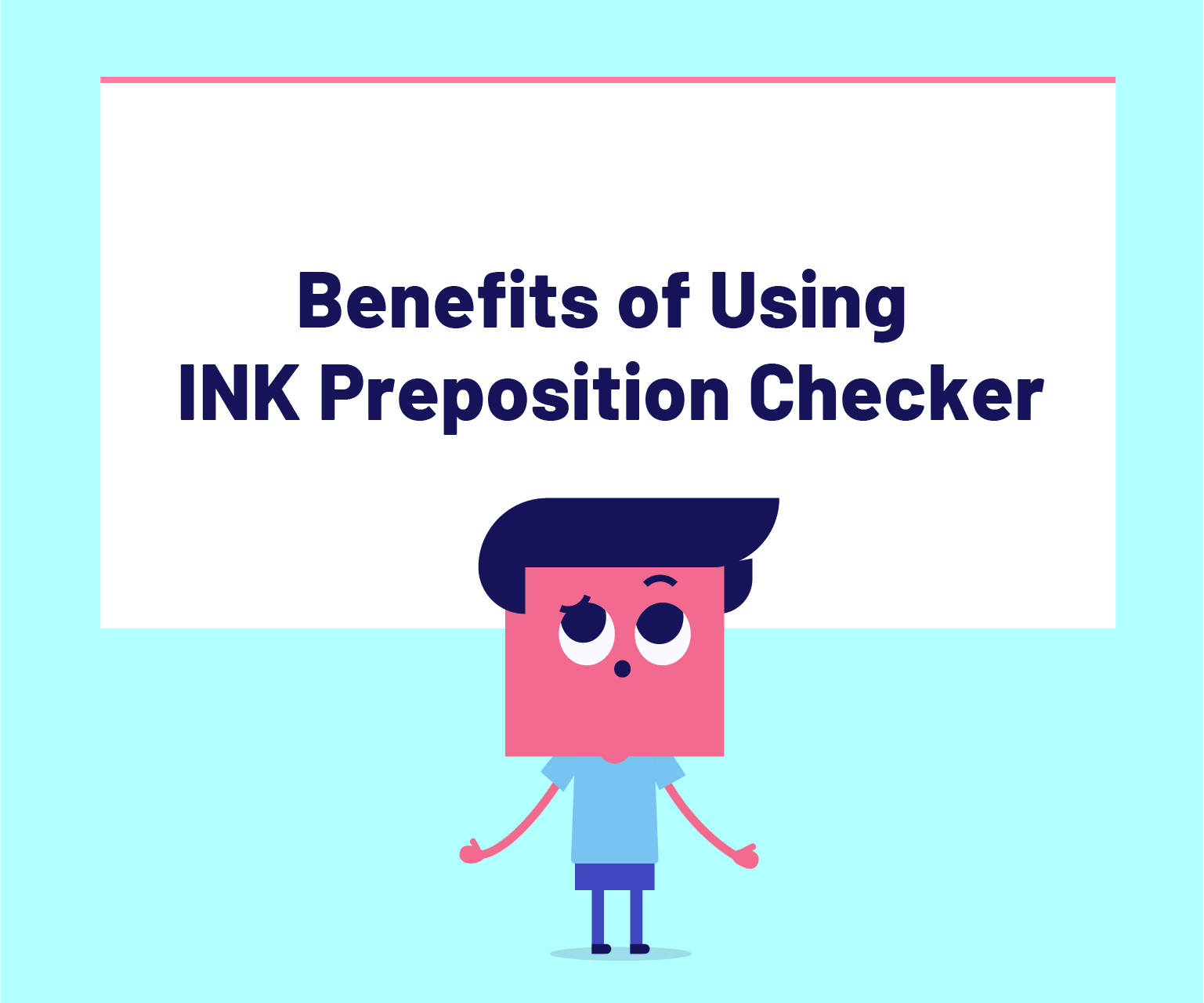 Use a Preposition Checker to Avoid Errors

The preposition rules outlined above can seem confusing, even for the most proficient writers. That's why you need a preposition checker tool to help you keep up.

Along with helping you pair your preposition correctly, you can also use a preposition finder to differentiate between 'to' preposition from a 'to' infinitive.

While you might be good at using prepositions in sentences, your colleagues may not be proficient. That's where a preposition finder comes in handy.

Employees using the INK preposition checker can quickly check their reports and articles for errors before posting on the company blog. What's more, you can do this in record time.

Use a Preposition Finder to Increase Writing Efficiency

With many prepositions in the English language, knowing the right ones to use in every sentence may be challenging. This is especially true if you're not a native speaker.

INK Preposition Checker can spot possible errors within seconds. That way, you'll have more time to do your proofreading and perform other tasks.

Like other grammar checkers, a preposition checker tool can help build your image as a polished writer.

You can avoid the common preposition issues, and produce your content faster. In the end, you'll appear more professional to your readers.