Correct pronoun usage helps avoid repeating yourself in your writing! Use our free pronoun checker to instantly identify pronouns in your content.

What is a Pronoun Checker? 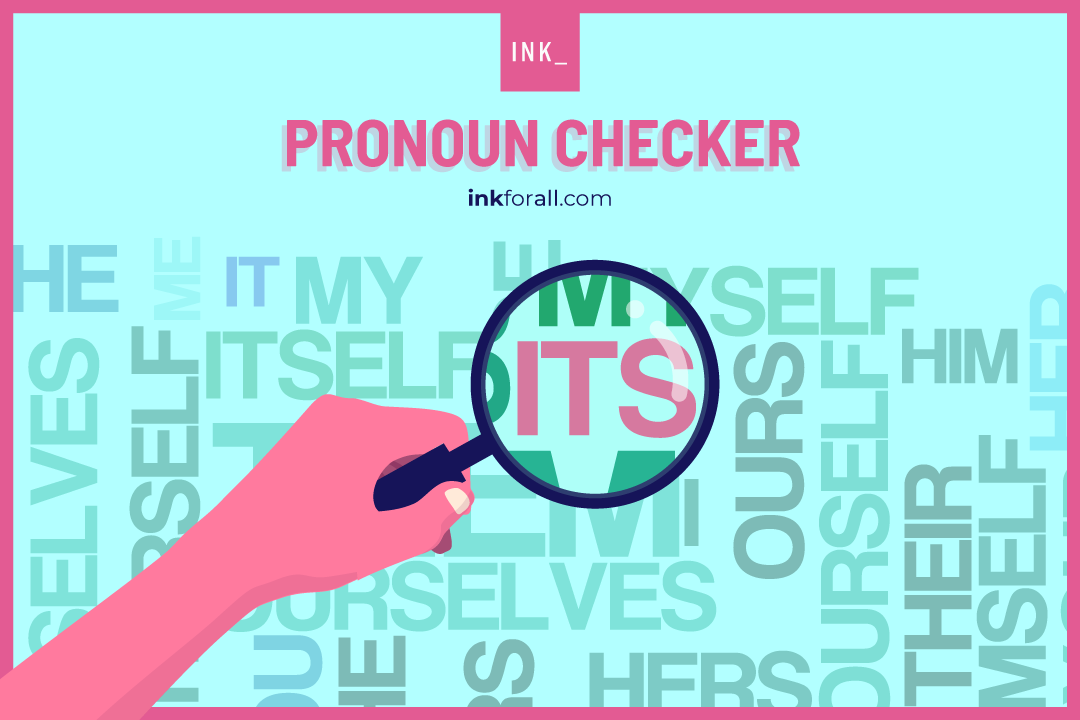 Like any other grammar checking tool, a pronoun checker is software that you can use to save time, money, and brainpower. It keeps track of your pronouns while you're writing and ensures that your sentences are grammatically correct. It works by analyzing your passages for any incorrect pronoun usage. Then, it will notify you about errors so you can make the necessary corrections.

Meaning, not only will you write better, but your language will also be more consistent. Your words will come out as clearly as possible, and you would have achieved the goal of writing — effective communication.

Besides, using the writing tool consistently can improve your writing in the long run, whether it's a blog post, essay, or novel. To fully grasp how essential a pronoun checker is to your success as a writer, let's begin with the basics.

In grammar, a pronoun refers to a word or phrase that you can use as a substitute for a nounor noun phrase. In other words, a pronounperforms similar functions as a noun. It can act as a subject, direct object, indirect object, object of the preposition, and much more. Examples of common pronouns include you, he, she, me, we, I, this, them, that, among others. At the same time, these examples fit into various pronoun subtypes, which are; personal and possessive pronouns, reflexive and reciprocal pronouns, demonstrative pronouns, etc.

The use of a pronoun usually involves anaphora. Thus, it refers back to a word that you used earlier in a text or conversation, to avoid repetitions.

The antecedent of the pronoun "he" is dependent on "that hungry man." Without pronouns, we'd be forced to repeat nounsconstantly. Not only would it make writing repetitive, but the write-up will also be unnecessarily cumbersome.

Nine Types of Pronoun and Examples 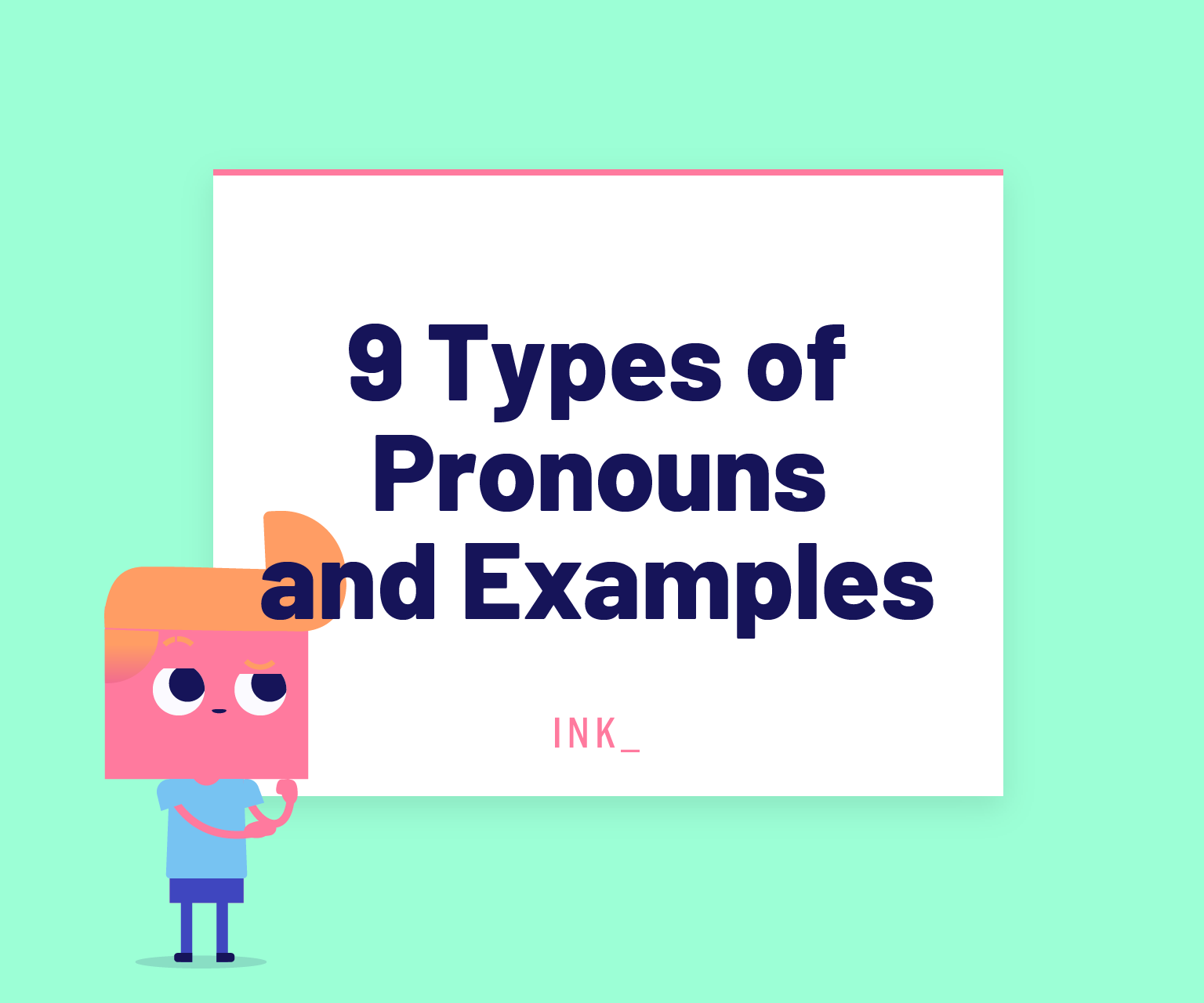 We have nine different kinds of pronouns. Although native English speakers generally understand how these pronouns work, each type comes with unique quirks.

We use personal pronouns to replace a proper noun (a person's name), a collective group of people, or a thing. There are two main kinds: subjective and objective pronouns.

The subjective pronouns replace the subject of a sentence — for example, I, you, he, she, it, we, you, and they. Note that you appeared twice in this example because it can be singular, addressing one person or plural.

With that said, here are some examples of sentences with personal pronouns.

Bruce and Tony are friends. They build robots together.

The objective pronouns, on the other hand, can substitute a sentence's object — me, you, him, her, it, us, you, and them.

We use demonstrative pronouns to point to something specific within a sentence. Although there are only four terms that belong to these type of pronoun (these, those, this, that), the usage can be a bit tricky.

The words This and That are singular, while those and these are pronouns.

Please note that the words this, that, these, and those in the examples above are not pronouns.

We use interrogative pronouns to introduce a question — for example, who, whom, whose, what, and which.

Since interrogative pronouns appear at the beginning of a question, they are easy to identify. However, it's not always easy to see how they replace nouns.

The words "who" and "whom" are commonly misused pronouns, even by native speakers. Here's are some common misuses of Who and Whom and how to correct them.

We use indefinite pronouns for non-specific things. It can refer to one or more unspecified objects, beings, or places such as someon e, anyone, or nothing.

Along with being the largest group of pronouns, indefinite pronouns are also the most common. Examples include Anyone, Somebody, Whichever, Whoever, Anything, Other, Something, Nobody, etc.

We can also use indefinite pronouns to create almost abstract sentences. Examples of such words include this, all, such, and something.

Possessive pronouns show ownership or possession of a noun. Examples include mine, its, hers, his, yours, ours, theirs, whose, etc.

The pronoun "mine" indicates possession of the infinity stones. Here are other examples of possessive pronouns in a sentence.

We use reciprocal pronouns to express mutual actions or relationships, and there are just do of them in the English language. These are each other and one another.

As you would expect, reciprocal pronouns prevent unnecessary repetitions in a sentence. They also reinforce the idea that collective and complementary actions are happening to more than one person or thing.

The first example indicates that Peter gave Gamora a gift, and Gamora also did the same. In the second example, "one another" suggests that the action of "working" was reciprocated by more than one country.

Relative pronouns often appear after a noun to help clarify a sentence or provide additional information. Examples include who, which, that, whom, and whose.

Intensive pronouns intensify or emphasize nouns and pronouns. These pronouns typically appear in a sentence after the noun that they're intensifying.

Note that the sentences would still be technically correct without the intensive pronouns. But, the meaning will lack that important context.

We use reflexive pronouns to refer back to the subject or clause of a sentence. It includes myself, yourself, himself, herself, itself, ourselves, themselves, yourselves, etc.

Later in the article, we'll consider why you need a pronoun checker to identify these words in a sentence. First, let's answer an essential question:

What are the Types of Pronoun Errors?

As said earlier, a pronounis a word or phrase that serves as a substitute for a nounor a noun phrase. However, a pronoun error can occur when a writer doesn't indicate what the pronounis replacing ( the noun). For instance, when you use the word "they" without a clearly stated antecedent. Another standard pronoun error occurs when the pronoundoesn't agree in number with its antecedent. An example of such is using "they" to refer to one individual or thing.

Here's an example of a sentence with an incorrect pronoun-antecedent agreement.

In the example above, the antecedent "girl" doesn't agree with the pronoun "her." The correct sentence would be:

In some cases, it can be challenging to pick the correct pronoun. This is especially true when you're using an indefinite pronoun in a sentence. Since indefinite pronouns like somebody, everyone, and nothing don't refer to a specific person or thing, using them can be tricky.

One way to get around this difficulty is using "their" with singular indefinite pronouns — for example, "Everyone rides their bikes." However, this isn't always correct in formal writing.

Once again, the pronounneeds to have a clear antecedent. But, sometimes a sentence can appear to have two possible antecedents.

We know the word "he" is the pronoun, but the antecedent is unclear. Who went to the hospital, the goalkeeper, or the striker? When you have an unclear pronoun reference error, you must rewrite the sentence to keep things clear.

A vague pronoun reference can occur when the nounor pronounthat acts as the antecedent is absent. The pronounsit, this, that, and which can lead to vagueness when they refer to something mentioned earlier in a sentence.

The pronoun is "it," but the antecedent is vague. What created the chaos on race day, the construction, or the changed route?

One way to fix this sentence is to replace the pronoun with a less vague antecedent.

Of course, we know the pronoun here is "them." But who is responsible for the frustration?

The best way to correct an implied pronoun error is to rewrite the sentence, replacing the pronoun with a noun.

A basic understanding of how pronounswork is essential if you want to avoid pronoun errors. But there's another option — you could use the INK Pronoun Checker. 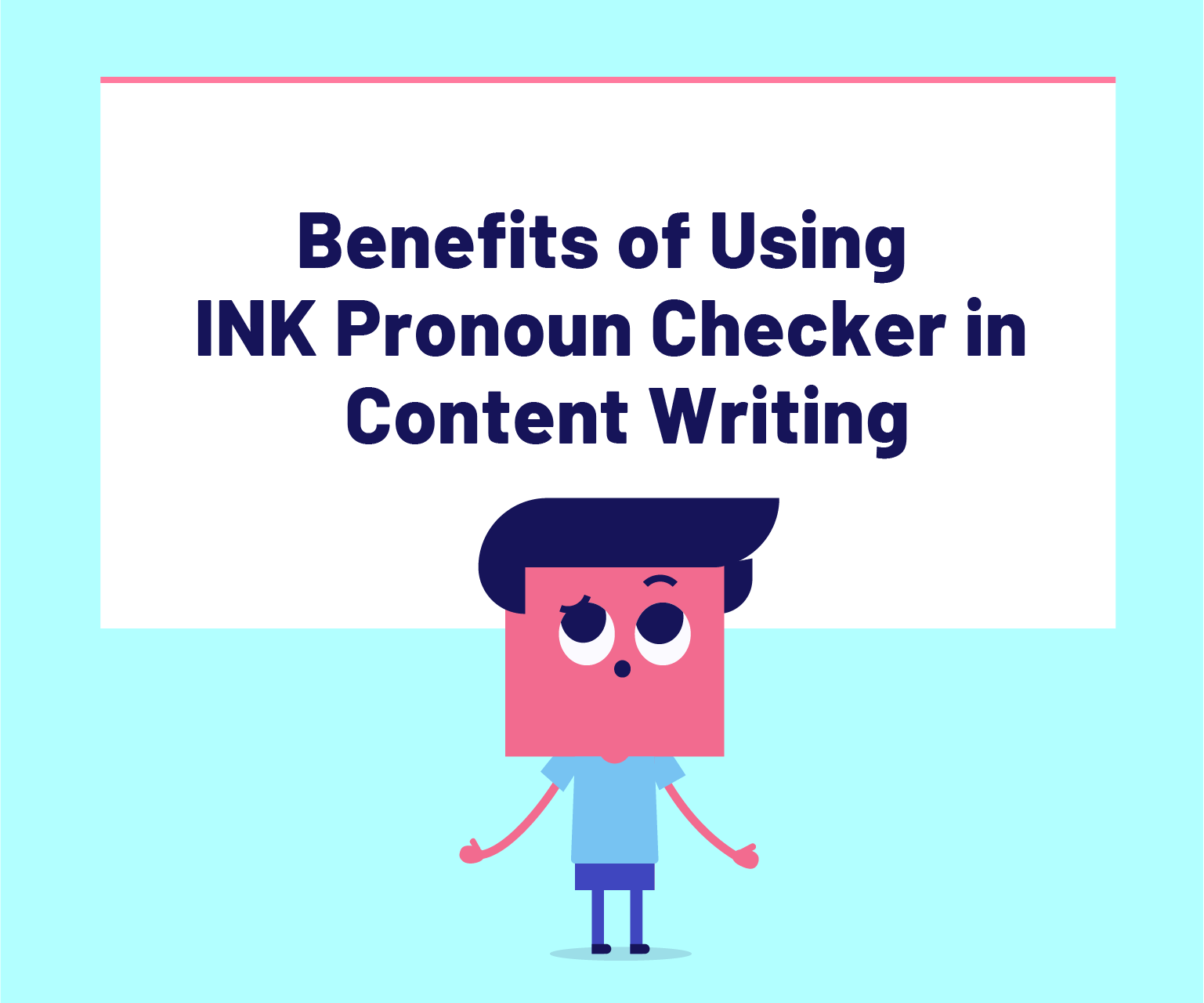 We rely on pronounswhile writing to keep our narrative moving, and that's fine. It's more crucial to maintain your momentum than worry about getting every sentence right.

However, when you go back to edit the text, you must check your pronounpercentage. Preferably, it should fall between 4 percent and 15 percent. If it's any more than that, readers may find your writing dull.

Use the INK Pronoun checker to find the parts of your text that you could do with fewer pronouns. Also, the tool can help you avoid the pronoun errors above.

Like most grammar checking tools, the INK Pronoun checker can help build a strong foundation in the English language.

It breaks your grammar down into bits to identify when you have excessive pronounsor pronoun errors in your work. That way, every time you revise and proof-read, you're also enhancing your knowledge of the language.

Correction of pronoun errors is easier than ever before, and that's thanks to the INK Pronoun checker. You don't have to read a vast library or a degree in computer science to proof-read your work on this tool.

The interface is intuitive and straightforward. You have to paste or upload your text into the pronoun detector, run the test, and make the necessary changes.

Manual proof-reading is very time-consuming. Even worse, trying to identify all the possible pronoun errors in your work can be exhausting.

That's where INK's grammar tool comes in. It helps you perform all the proof-reading to ensure correct pronoun usage. What's more, you can complete this process within a brief period.